skip to main | skip to sidebar

We just saw this on Velonews:

The state of MN has seen a formidable professional mountain biker dominate the MN series in the year 2009, taking the win at almost every race with dominating force. Looking to expand his repertoire, the man with the giant calves, Brendan Moore, decided to tackle a new race in MN, The Sandwich 50. "It sounds like a fantastic race", said the series winner earlier this year, "I look forward to it".

Things change. As the date loomed ever closer our mountain bike hero had second thoughts. He worried about the distance, the rumors of phenomenal singletrack, and 2 riders specifically; Charly Tri and Matt Kurke. "They are the Eastwood Ninjas", a Rochester local was heard saying. Yes, Charly and Matt bring fear into the hearts of those that ride Eastwood (and those that lurk as well). So off our MN favorite went this last Easter Sunday. With his children reaching out to be with their Dad and his wife stuck at home dealing with the daily needs, Brendan set out to ride the famous Eastwood trails.

The man in the green Saturn remembers that day, "I was just sitting there when some guy came through on a mountain bike. He kept hitting the trees with his calves. It was like he was not able to master the trail". It was reported that our local hero was frustrated and discouraged. He knew racing "The 50" would only end in his inability to to break the skill of Charly and Matt. With his head down, he made his way home.

It was rumored that he took his frustrations out in his man cave. One, then 2 beers were consumed. Stumbling and slurring his speech, he was reported to be riding down his street on his child's strider bike. Reverting back to a time when life seemed much more innocent.

The next day he would send an e-mail that would only confirm to the rest of the world what he already knew. He didn't have it in him to race The Sandwich 50. You can see here in the picture as part of Brendan's mental regression he fashioned a Velorochester onesie to race in. He can be seen now challenging 5 year old's on his street to races. 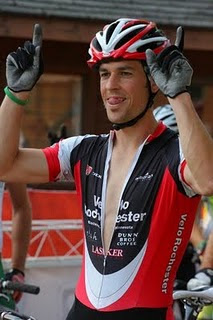 We here at Velonews hope Brendan has a speedy recovery.

So the good news is that one of our people on the waiting list is now in. Porter was thrilled with the news.
Posted by Charly Tri at 1:54 PM