skip to main | skip to sidebar

Well around here we are alternating between Mud Bogs and Jungle out on the trails.   Can't do much about the rain currently, but we will try to do a little something about the overgrowth.  If your interested in helping meet at Eastwood on Monday at 6 pm in the big parking lot.  Bring water and gloves.  I will have tools and will be bring two large brush cutters (husqvarna and Gravelly ) to add a little muscle to the work.  If you can make it I sure would appreciate it.  We usually only have to do eastwood twice a summer so really not that much work.

Gamehaven update;
There has been some work being done at eastwood.  There are two new short sections of trail near the begining if your riding from the upper scout lot.  The first allows you to miss one of the mud holes on the wide trails and the second smooths out the transition into the first section of singletrack.  This is the recommended way to ride the trail right now as the lower entrance from the DNR parking lot is really over grown and we couldn't get in there to trim it because it was simply too wet.  See the map pictured.  I circled the new detours in blue and marked the really overgrown and wet section with slashes.  The new section has been getting worked on and is about 1/2 rough cut.  Watch for future work dates on that. 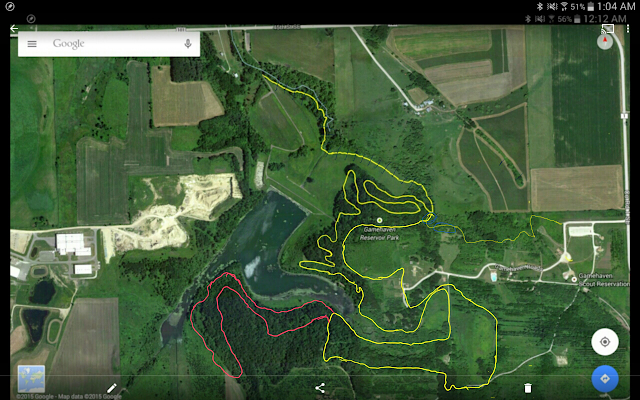 Posted by The Rider Formerly Known as VR Captain at 6:22 PM No comments:

Were meeting at 10am this sunday 6/14  in the scout lot.  The agenda for th day is to work on trimming in a few overgrown areas first and then to get a little clearing done on what will be the new trail.  If you can make it remember to bring water and gloves.  Also bring loppers, chainsaw and weed cutters in general.  We'll also have the gravelly and my new walk behind line trimmer pictured.  If you have any questions please let me know. 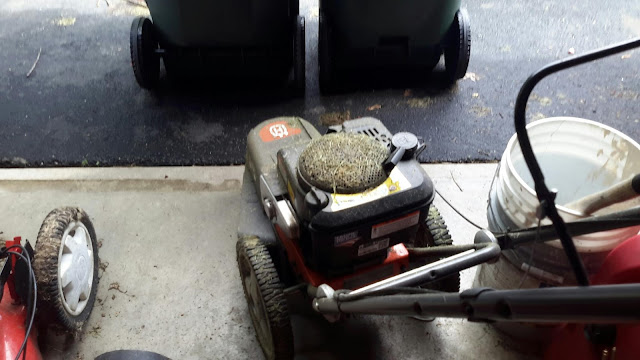 Posted by The Rider Formerly Known as VR Captain at 8:22 AM No comments:

You Bet it's wet.

I was going to post something fun about a new tool but I decided not to. I'll simply say that when the radar looks like this there shouldn't be cars loading bikes on the roof rack in the lot.

Posted by The Rider Formerly Known as VR Captain at 11:00 PM No comments:

Attention this is not a current picture.  The mountain Bike Race Season is fast approaching and if your like me and maybe want to do a few races to help shed that winter weight you've gained over the last 13 years then I highly suggest the minnesota State mtb series. While your at it you maybe want to join a club or team.  Well I happen to know a local group looking for a few fresh faces for their team. If you or someone you know would be interested in joining Bicycle Sports email me at mjkurke@gmail.com for details. Hey It don't cost not nothin.

Well , my last post got people a little excited which is good , but then Mother nature stuck her nose in . So things are a little wet now with the 10 inches of Snow and heavy rain. It's okay though because face it you needed those road miles for base and getting on dirt that early probably would have burned you out for later in the summer right? This weekend is Easter , which is important to the religious nut cases out there (before anyone gets offended tell me You weren't hoping to sneak a ride in Sunday). So anyway we won't be out for a least two weekends,

Only other thing of interest was the finalizing of the MNSCS series info. For the first time in like 15 years I don't know the majority of the courses by heart. That's a good thing in my book and I hope I can make a few more this year. Saturday short tracks could be fun too. Hope for a fat bike short track class. Like bumper cars on the mtb Course. Anyway hit up mntbs.com for More info.

Posted by The Rider Formerly Known as VR Captain at 11:14 PM No comments:

It's been a while but I decided to fire this back up to post some Gamehaven info in a longer form factor than facebook or message boards really allow for.  Last year was a realitively quite year at Gamehaven for a number of reasons.  There were problems with the ditch witch as well as a really wet spring and so there wasn't as much time to build as one could hope.  The other issues were planning for the big high school league race and waiting to hear if the park would gain approval as a regional park or not.  Both things were a success.  Obviously on the trail building front the official regional park designation helps guarantee tbat what we build now will be there in the future.  And we have some big plans.  See the picture for the first addition that will be worked one this spring.  Honestly I have marked a lot of trail and I think this is the best section I have ever flagged.  I hope you like the view of water and protected forest because thats what your getting.  Yellow on the map is the current trail and red is the addition.  The addition will drop all the way back to the base of the big climb but once we have it connected so you can ride a loop we will go back and expand the addition into more of the woodland around it.  At some point in the near future it's going to make a kick ass Sandwich 50 course. 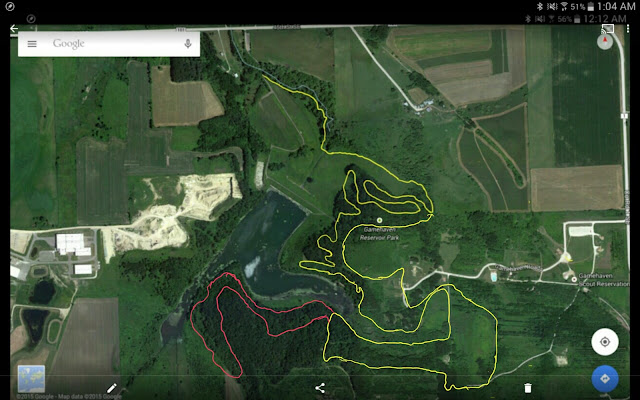 Posted by The Rider Formerly Known as VR Captain at 11:41 PM No comments:

Tubeless Knards in the Snow 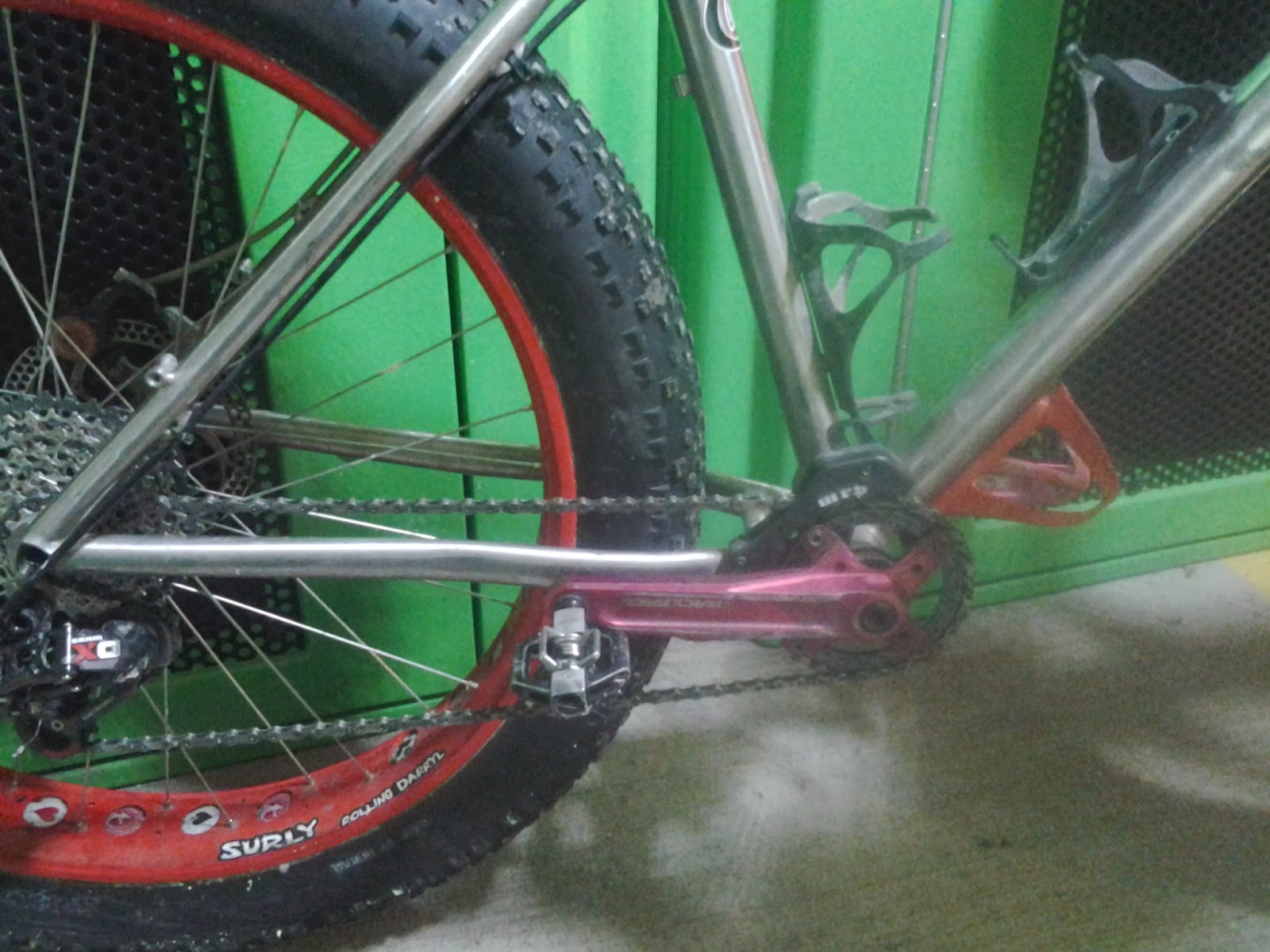 The Vee Tires Snow Shoes had to go.  I kept hoping they would work out because of the ease of tubelessness that they brought.  Once I took them off and replaced them with my Knards I was blown away by how terrible they were.  I mean it too, just horrible tires.  I am going to try to sell them, but cheap and with an accurate description that I don't like them at all.  Basically exactly what I would expect from a Vee tire as far as feel goes.  I was amazed how much better the knards felt on every surface and at every PSI.  It's like a different bike.

I set up the Knards tubeless, I didn't change anything from the original set up but I did figure out an easy way to get the unseated bead to seat without building up the cavity.  Just hold the wheel horizontal with the unseated bead pointing towards the ground.  The tire is big enough and heavy enough that gravity will do a lot of the work once you hit them with the compressor.

I have only used them on snowmobile trails so far, but there really isn't much out there about people using the Knards in the snow.  They roll great, but don't expect them to have much bite in powder.  Off cambers with a little loose stuff are particularly challenging.  However float felt good and otherwise traction was great.  I could definately see these being a better option than Larry's.  They would be perfect as Big Fat Knards.

On the front tire of the snowshoes, the stans had turned into a hard ball.  Only about half of it had so there was nothing to worry about yet, but it was wierd that only one tire suffered from that.  I think sealant in these really cold temps is an issue.  This morning on my commute into work on the knards my front tire went from 6 psi to basically 1 psi.  The sidewalls looked like stans was seeping through them.  I was wondering if it's from the cold making the rubber harder and less pliable thus keeping any pores or whatever you want to call them from closing.  It's only a thought but I don't know what else to chalk it up too since I haven't had a problem with the tires loosing air any other day.  I am going to try a little different mix of sealants tonight.

Also that is a Race Face 30 Tooth Wide Narrow chainring on my bike and I am very pleased with it as far as price and ease of mount up go.  I still have the chainguide on because I don't have a nifty rear deraileur with a clutch but I still don't know if I would really need it or not.


Posted by The Rider Formerly Known as VR Captain at 2:25 PM No comments: